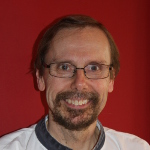 Sifu Jim Gardner is a second-degree black sash. He began studying kung-fu in 1993 and earned his black sash in 2003.

Sifu Jim currently teaches the Youth Novice and Red Belt ranks, as well as helping out with several other classes. He works with Sifu Dave to coordinate the Leadership Team and also compiles our monthly Words of the Week (based on quotes provided by Sifus and members of the Leadership Team).

Sifu Jim is a science fiction writer with two degrees in Applied Math; he recently began working on a degree in Earth Sciences.