The Significance of the Tiger in Kung Fu

As you know, the style of martial arts we study at the WKFA is called Shaolin Five Animal Kung-Fu. That’s because the Shaolin monks who created our style often looked to the animal kingdom for inspiration when they were developing the strikes, blocks and sequences that would make up our art.

It’s not surprising that the Shaolin monks would focus on a powerful creature like the Tiger—but it’s not just the Tiger’s brute strength that makes it a significant symbol in the martial arts. There are other aspects we can take from the Tiger as well.

For example, while definitely one of the most ferocious animals on earth, did you know that a Tiger will fight only when absolutely necessary? They will kill for food and males battle each other during mating season, but otherwise Tigers prefer to intimidate potential adversaries rather than get into true confrontations (likely because they know that doing so could lead to injuries to themselves). One technique a Tiger will use to avoid fighting is the power of its voice. Indeed, Tigers have been known to scare off potential foes with nothing more than a roar.

Furthermore, for a creature that is in many respects a perfect killing machine, Tigers are also masters of stealth. Rather than engaging in a potentially fruitless, energy-depleting chase with a deer or an antelope, Tigers rely on their ability to sneak up on their prey. So patient and persistent are they, they’ve been known to spend hours creeping ever-closer to their target before launching an attack.

Tigers are also extremely adaptable. They can survive not only in grasslands, but in swamps and forests as well. Their striped coats allow them to blend in with their surroundings, so you never know when one might be close by.

Despite their ferociousness, Tigers are also very generous animals. In the wild, male Tigers will often allow their females and cubs to feed first. Sometimes they even let unrelated Tigers share in their kills.

All of which are interesting facts, I suppose—but how do/should they inform us as martial artists? A number of ways actually:

Yes, there are many things we can take from the Tiger, besides its brute strength. That’s what makes it such a potent symbol in the Kung Fu we train. 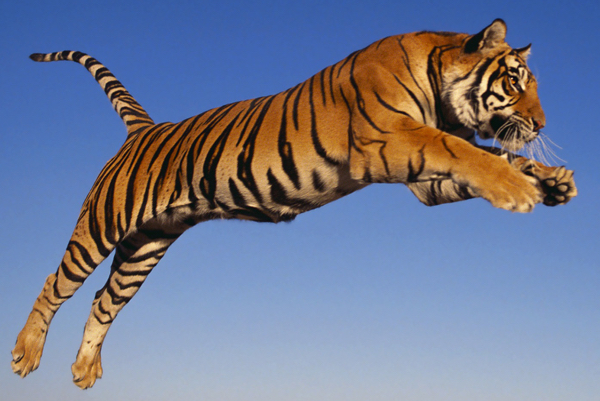