The Significance of the Dragon in Kung Fu

In the last newsletter I wrote an article about the significance of the Tiger in Shaolin Five Animal Kung Fu. It only makes sense that I should balance out that perspective by focussing on the Dragon this time around.

That’s because the Dragon is the counterpoint to the Tiger in Kung Fu symbolism: the Yang to the Tiger’s Yin, as it were. While the Tiger represents death and all things earthly, the Dragon symbolizes birth and the heavens (together they embody the entire circle of life). The Dragon is also associated with wisdom, ferocity and standing guard against enemies. In contrast to the Tiger’s straight-on, brutal approach to combat, the Dragon uses circular, flexible attacks. Also, the Dragon unleashes its power only as a last resort, preferring instead to outwit opponents. But when a Dragon’s power is unleashed, it is shocking and overwhelming.

Personally I always found it a bit odd that amidst the Tiger, Leopard, Snake and Crane (real creatures that you could see Kung Fu Masters wanting to emulate in physical confrontations) the Five Animals also included a mythical creature that you couldn’t actually observe. In researching this article, however, I discovered that the Dragon has been an important part of Chinese culture for thousands of years. Going back all the way to 3000 BC, Chinese Emperors were associated with Dragons. It’s only natural therefore that when the art of Kung Fu was being developed, the Dragon would find its way into the iconography.

While it’s true that the Tiger is mostly Yin and the Dragon mostly Yang, they do have aspects of both. For example, the Dragon is Yang in that it soars through the clouds, but it is Yin in that it hides beneath the earth (which explains why our Dragon Form has so many leg-burning ups and downs in it).

In some martial arts the Dragon represents a level of enlightenment. Students start out as Tigers, all brute strength and linear movements, but after training for awhile they become Dragons. That is, they become circular and more intellectual in their approach. We don’t necessarily stress that philosophy at the WKFA (we’re more about taking the best aspects of all five animals), but you can see how it fits.

All of that said, how should the Dragon influence your Kung Fu training?

Keep up your training! And the next time you’re practising a Form, try to imagine how a Dragon might do it. 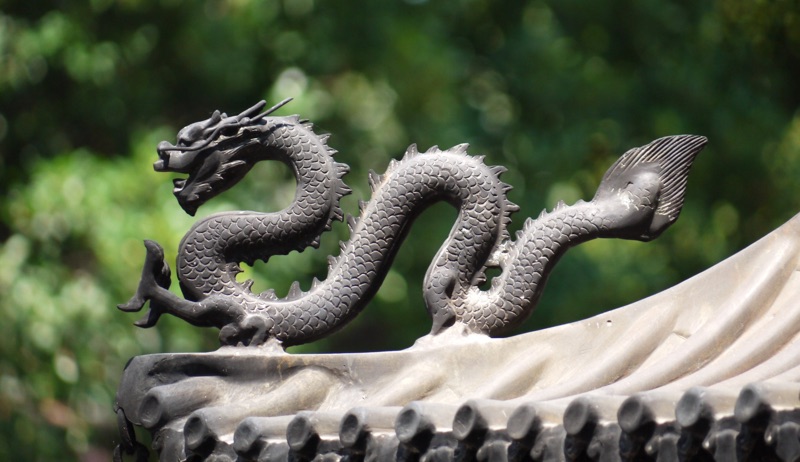